Celebrating 2019 and 50 Years of Oceanic Society

As this year comes to a close, we want to thank you for supporting Oceanic Society and our mission to improve ocean health. With your help we have continued to deepen the connections between people and nature to build a more oceanic society through scientific research, sustainable travel programs, species conservation, and innovative communications efforts like our Blue Habits program.

This year we celebrated our 50th anniversary as America’s first non-profit dedicated to oceans. Here's a look at some of the work we accomplished during our golden year with your support!

Each of our travel offerings aims to positively impact the natural areas and human communities we visit while also delivering transformative nature experiences for our travelers that deepen their connections to nature and promote the adoption of ocean-friendly “Blue Habits.” Any profits we earn are invested directly into our ocean research and conservation programs worldwide.

The State of the World's Sea Turtles Program in 2019 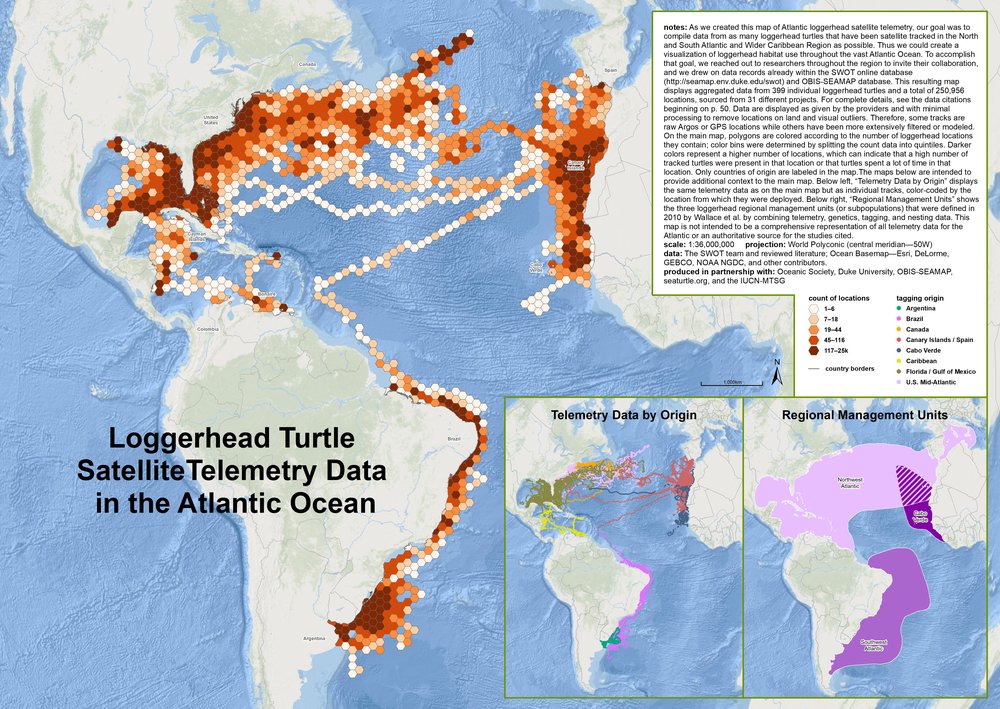 Our State of the World's Sea Turtles Program is a global effort to improve the conservation of sea turtles and their habitats (learn more). In 2019 we published the 14th volume of the award-winning State of the World’s Sea Turtles (SWOT) Report, which are distributed free-of-charge to research and conservation programs worldwide. For the report, we produced: 1) the first comprehensive map of loggerhead turtle satellite telemetry in the Atlantic Ocean, compiling 250,956 data points from from 399 satellite tracked turtles that were contributed by 31 different projects, and 2) the first comprehensivemap of sea turtle nesting and satellite telemetry from the two sea turtle species that inhabit the Mediterranean Sea (green and loggerhead turtles).

We also gave 14 small grants to high-priority sea turtle research and conservation projects in more than a dozen countries across South, Central, and North America, Africa, the Caribbean, and Southeast Asia.

In celebration of our 50th anniversary as America's oldest non-profit organization dedicated to ocean conservation, we led a series for five special expeditions to Palau, Baja California (Mexico), Trinidad, Raja Ampat (Indonesia), and the Galapagos Islands (Ecuador). We invited photographers, artists, business leaders, media influencers, philanthropists, and members of the public to join alongside ocean researchers and conservationists as we explored globally important ocean habitats and came face-to-face with threatened species ranging from leatherback sea turtles to whale sharks. With generous support from SC Johnson, each expedition in this "Five for 50" campaign was used as a platform to communicate about ocean conservation using social media, traditional media, and video production, and we reached hundreds of thousands of people with ocean conservation messaging tailored by our Blue Habits program.

Filmed throughout the Five for 50 Expeditions, we launched the first three episodes of the award-winning Blue Habits film series.

With support from SC Johnson, we launched a five-part Blue Habits film series and released the first three episodes, which were filmed during our Five for 50 expeditions to Palau, Baja California (Mexico), and Trinidad. Each episode explores a critical ocean conservation issue through the personal lens of a stakeholder as we visit one of Earth's most important ocean habitats. Through this video series, our goal is to motivate personal behavior changes that support healthy oceans. The first three episodes targeted behaviors related to plastic pollution, sustainable travel, seafood consumption, and reached more than 750,000 viewers online. The series was awarded Best Travel Web Series at the 2019 International Travel Film Fest. Episode 3, Trinidad was chosen as a finalist for Best Documentary Short in the 4th Annual Shorty Social Good Awards, and Episode 2, Baja was chosen as an official selection in the 2020 Lookout Wild Film Festival.

Blue Habits is an innovative program that develops and applies behavioral science to go beyond 'raising awareness' about ocean conservation to motivate and sustain ocean-friendly behaviors.

In 2019 we completed a second phase of research in partnership with researchers from Stanford University's Graduate School of Education and Woods Institute for the Environment. Together, and with input from outside collaborators, we developed and tested new tools and methods that are designed to enhance the impact of our whale watching tours on our travelers' ocean conservation behaviors. 275 Oceanic Society whale watch travelers participated in the pilot study in early 2019, and final results are now being prepared for publication. Through this study we have successfully identified simple, low-cost ways to improve the impact of our whale watching tours on travelers' everyday behaviors in ways that support healthier oceans, and we are now working to make those methods available to nature-based tourism operators worldwide. We also launched a new online Blue Habits portal that is dedicated to ocean-friendly living, and we published resources aimed at reducing plastic pollution, supporting sustainable seafood choices, reducing the use of harmful sunscreens, that were read by more than 310,000 people this year.

We are deeply grateful to all of our donors, travelers, and community members for all of their support to our work in 2019. If you like what we are doing and want to help, please consider making an end of year donation to Oceanic Society. We are a 501(c)(3) non-profit organization and we depend on people like you to support our efforts.