The Banda Sea sits in the Coral Triangle, at the convergence of the Indian and Pacific Oceans and is bordered by Indonesia, Australian, and Timor-Leste.

Jungle-capped limestone islands dot the seascape, and breathtaking white beaches contrast sharply with the crystal blue water of the Banda Sea. Beneath the waves, fish of all sizes swim around brilliant corals in the shallow waters, while deep waters provide passage for a multitude of cetaceans. From the enormous blue whale to dazzling spinner dolphins, over 22 species of whales and dolphins have been spotted in the Banda Sea, making it the perfect destination for cetacean enthusiasts. Blue whales are the largest known animals ever to have lived. © NOAA

Reaching lengths up to 100 feet and weighing up to 200 tons, blue whales are the largest known animals ever to have lived. They spend summers in cooler waters filter feeding on krill, using sinuous baleen like a pasta strainer to separate water from food, and migrate towards the equator in the winter months to breed. Blue whales produce low-frequency sounds, and can be heard in deep water hundreds of miles away.

Blue whales appear light blue when seen through the water, and out of the water appear as blue-gray with some light-colored patches. On their backs, their dorsal fin is relatively small and located towards the back of the body, closer to the tail than the blowhole. 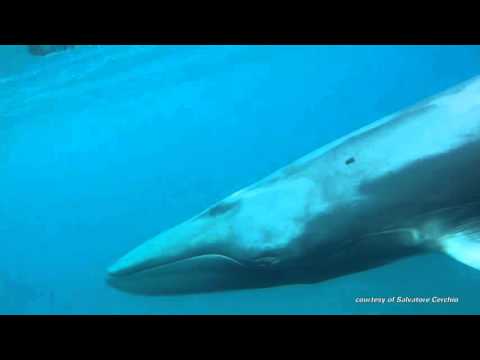 Lucky whale watchers may have an opportunity to spot the elusive Omura’s whale. These whales were first identified as a species in 2003, prior to that they were thought to be smaller form of Bryde’s whales.  While there is still a lot being learned about these whales, scientists have found that they live primarily in tropical and warm-temperate waters. Omura’s whales are widespread around Indonesia and have been reported in the waters off of Komodo, Raja Ampat, Misool, West Papua, Borneo, and Sulawesi to name a few.

Omura’s whales, like blue whales and pygmy blue whales, are rorquals, or baleen whales, with long grooves along their throat that can expand when they’re feeding.  They reach around 35 feet in length and have asymmetrical gray and white markings. A Bryde’s whale on the surface of the water. © Jolene Bertoldi, CC BY 2.0

Another baleen whale you may see in the Banda Sea is the Bryde’s whale (pronounced “broodus”). They are typically found alone or in pairs and usually feed near the surface of the ocean. However, they have been known to dive down to 1,000 feet in search of meals.

These whales are usually 40-50 feet in length, but may reach 55 feet. They have a small, hooked dorsal fin like a bottlenose dolphins’ dorsal fin. A pilot whale breaks the surface with a splash to take a breath. © Adam Li, NOAA

Short-finned pilot whales are distinct in appearance. They are a small, toothed-whale only reaching between 12-24 feet in length. They have a short rostrum (snout), a slightly-square bulbous melon head, and are dark gray to almost black in appearance. Their body type is similar to belugas, but much more streamlined.

Pilot whales are extremely social, and are found in groups of 15-30 individuals. They don’t travel far from their home territory, and perform deep dives (over 1,000 feet!) to feed. Their diet consists mainly of squid, but can also include octopus and fish.

Killer whales, also known as orcas, are the largest member of the dolphin family! © David Ellifrit, NOAA CC BY 2.0

Killer whales, also called orcas, are some of the most familiar oceanic megafauna. Sometimes referred to as sea pandas, they have distinctive black and white coloring that stands out in the cetacean world. Killer whales are the largest member of the dolphin family (they aren’t actually whales!) and may reach 16-26 feet in length. They have a tall, black dorsal fin that can reach up to six feet in height.

A pantropical spotted dolphin looks up at the boat from beneath the water. © NOAA

These social dolphins can oftentimes be spotted commingling with other dolphin species, and can be part of pods that are hundreds to over 1,000 individuals in size! Pantropical spotted dolphins are named for a spotted pattern that develops as they age. Adults weigh no more than 250 pounds, and less than 7 feet in length. They have long, slender rostrums and a distinctive countershading pattern – meaning they are lighter in color on their stomach and darker along their back to better blend in to their surroundings.

A pod of spinner dolphins leap out of the water. © Thomas Koenye

Spinner dolphins are aptly named for their dazzling display of acrobatics. They will leap into the air, performing pirouettes and turns that leaves viewers breathless. They are slightly smaller than pantropical spotted dolphins, reaching 6-7 feet in length as adults, but only about 160 pounds in weight. Spinner dolphins have long rostrums with dark gray backs and lighter gray/white stomachs.

Are you ready to sail alongside some of these charismatic cetaceans? For more information about our luxury expedition to the Banda Sea, see our Banda Sea: Reefs, Blue Whales, and Hammerhead Sharks Itinerary to plan your trip of a lifetime!