Home / Blog / What Can I Do About Climate Change? Your Questions Answered.

The report states that if greenhouse gas emissions continue, in the next 20 years, possibly as early as 2034, the global temperature is expected to reach or exceed 1.5°C of warming above pre-industrial levels, the target limit set out in the Paris Agreement. The report anticipates climate changes to increase in the coming decades, with “ 1.5°C  of global warming, there will be increasing heat waves, longer warm seasons and shorter cold seasons. At 2°C of global warming, heat extremes would more often reach critical tolerance thresholds for agriculture and health.”

The IPCC report has left many feeling upset, frustrated, and  helpless. But just as clear as the report is that human activities are causing climate change, it is also clear that we can limit climate change, even stabilize the climate.  “…strong and sustained reductions in emissions of carbon dioxide (CO2) and other greenhouse gases would limit climate change.”

“Changes to the ocean, including warming, more frequent marine heatwaves, ocean acidification, and reduced oxygen levels have been clearly linked to human influence. These changes affect both ocean ecosystems and the people that rely on them, and they will continue throughout at least the rest of this century.” IPCC Regional Fact Sheet- Ocean

While a growing number of people are concerned about climate change and looking for ways to take action, at the same time, some governments and industries are failing to act with enough urgency. This leaves many people wondering: What can I do about climate change? Can I make a difference on my own? And what are the most impactful actions I can take to reduce my carbon footprint?

“It has been clear for decades that the Earth’s climate is changing, and the role of human influence on the climate system is undisputed,”  IPCC Working Group I Co-Chair Valérie Masson-Delmotte

While we need governments and businesses to take large-scale actions, we also cannot afford to wait for them to act. Everyone has a role to play and a responsibility to do their part, and there is no better time to take action than now.

Read on for our answers to pressing questions about climate change and personal action and some recommendations for the most effective actions to reduce your carbon footprint today.

A growing movement of people are taking personal action for climate change every day. There is no better time to act than now! © Mika Baumeister

Do my actions really make a difference? Don’t we need bigger changes to tackle climate change?

Combating climate change undoubtedly requires large-scale systemic change on a global scale, and governments and corporations have a critical role to play. However, people vastly underestimate the importance of individual actions in fighting climate change, especially when taken to scale. Our lifestyle choices (e.g. how much we travel, how we get around town, and what we eat), our home energy use (both how much we use and where our energy comes from), and our efforts to reduce waste, among other behaviors, both directly and immediately reduce greenhouse gas emissions and also help drive long-term systemic changes.

A recent report by the nonprofit organization Rare analyzed all 100 climate change solutions identified by Project Drawdown in order to understand the potential impact of individual behavior change in addressing climate change. Rare identified seven individual behaviors that have the greatest potential for impact and are both feasible and practical for people to implement without dramatic lifestyle changes. The report found that if just 10% of Americans adopt these seven behaviors, the U.S. could still meet its emissions reduction target set by the Paris agreement by 2025, even if our government fails to act with enough urgency (see the report for more details).

Without making dramatic lifestyle changes and in the absence of sweeping new policies, a small portion of Americans can have a measurable, substantive impact on reducing national emissions– Rare (2019)

Larger, global initiatives are still necessary to create the sweeping changes we need to tackle climate change. However, these findings show that we as individuals are not powerless. Our collective actions will help fill in the gaps while we continue to fight for broader policy changes.

What are the most effective actions I can take to reduce my carbon footprint?

The short answer is: do whatever it is that you are most willing to see through and commit to. Adopting any of the key behaviors highlighted below, or other behaviors that help reduce your carbon footprint, will have an impact. The most important, and likely successful, contribution however, will come from those actions that you are able to commit to consistently. 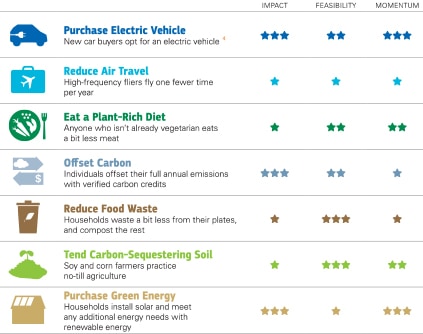 The seven most impactful individual actions to reduce greenhouse gas emissions, as identified by Rare report

The good news is that more and more people are taking actions to reduce their carbon footprint: the sale of plant-based food has grown by 8.1% since 2017; the number of people who commute to work by bike has increased by 60% in the last decade; renewable energy is the fastest growing energy source in the U.S., increasing 100% between 2000 to 2018; electric vehicle sales grew by 81% between 2018 and 2019 in the U.S, and grew 64% globally.

Sign up to receive tips to combat climate change in your daily life. Join the growing movement!

Not only do your actions have direct positive impacts, you can also motivate others to take action too. Behavioral science shows us that people are most likely to adopt a new behavior when they see other people doing that behavior or otherwise see evidence that a new social norm is forming around that behavior, even if that means behaving in a way that is out of step with current social norms. As a growing number of people continue to make everyday carbon-reducing behaviors the norm, the more people will follow suit. 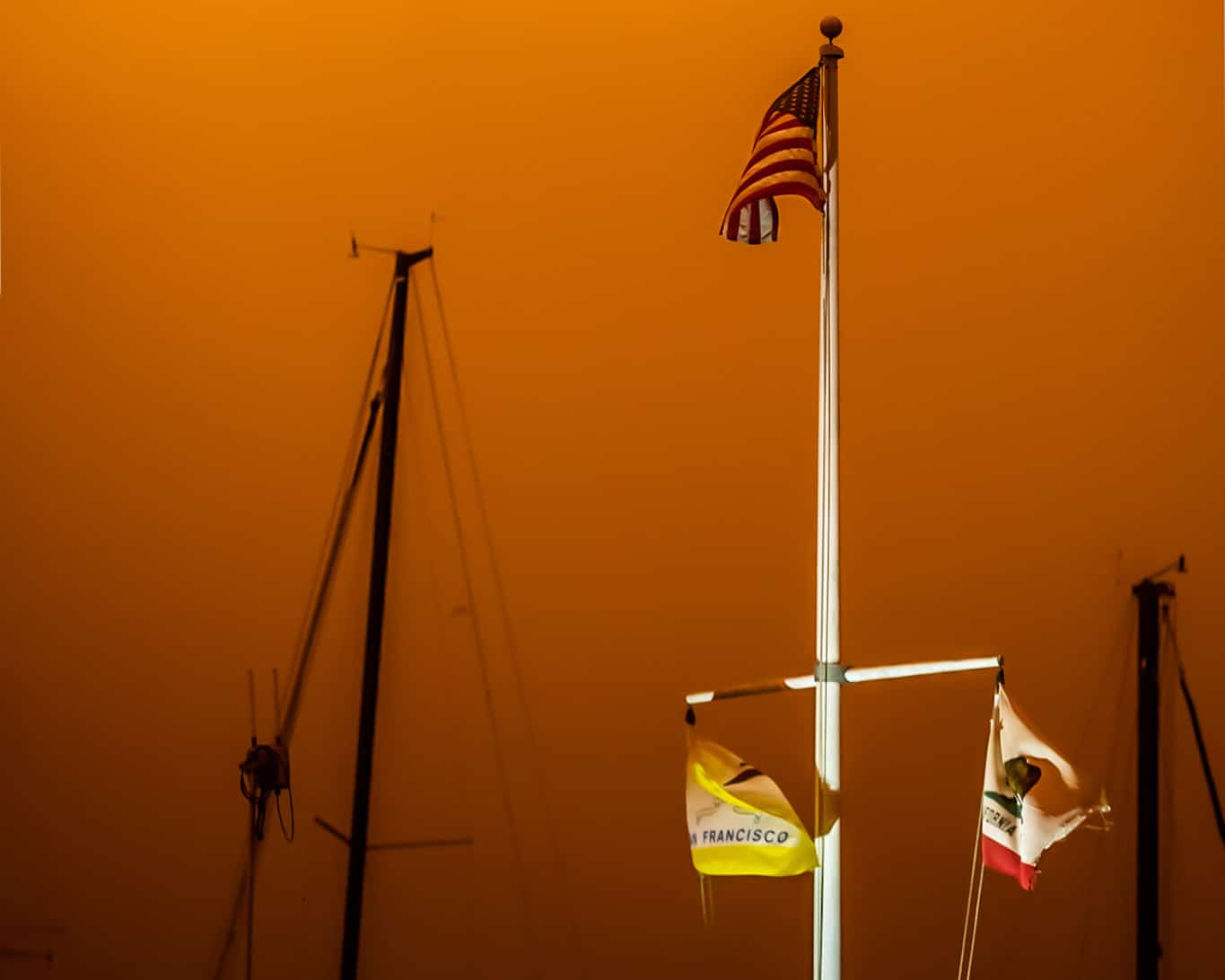 What else can I do to fight climate change?

Beyond adjusting your everyday behaviors, there is plenty that you can do as a consumer, voter, and activist to influence the larger systems that impact the climate.

Test how much you know about what can be done to fight climate change.

Watch our short film about coral reefs and climate change: 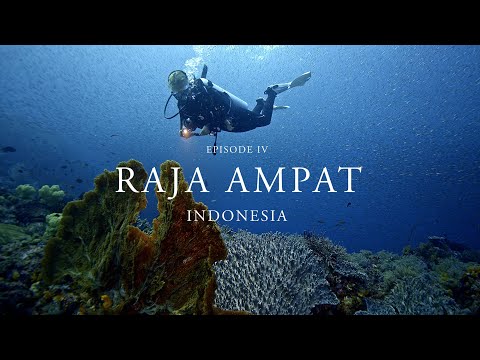 Get More Tips, Delivered to Your Inbox 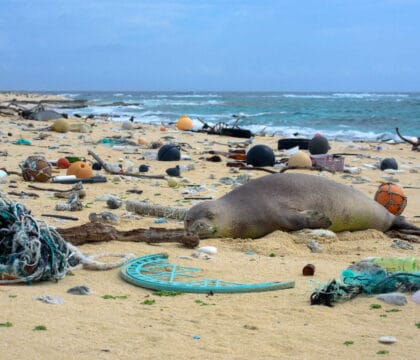 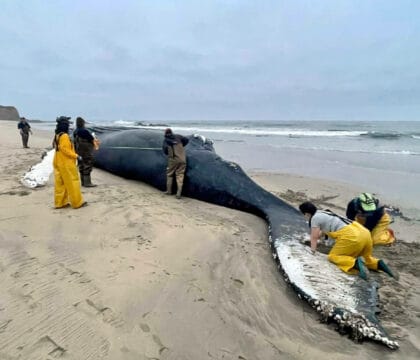