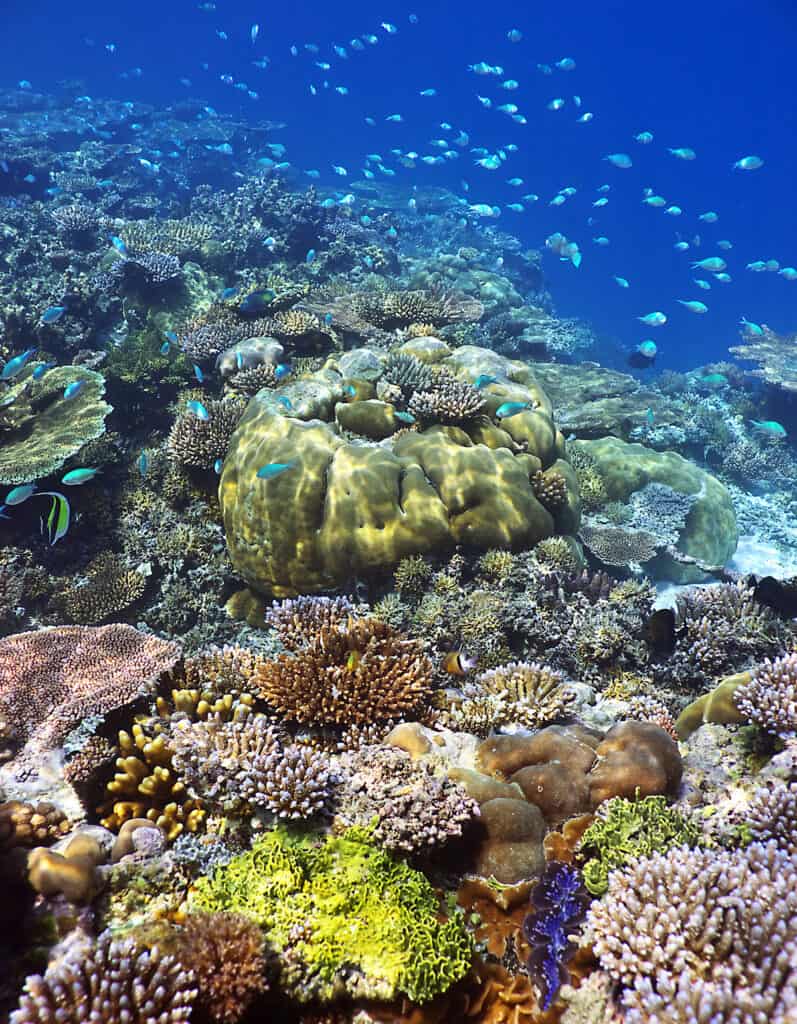 Harboring more species of marine life than any similar-sized area in the world, Palau is one of the best snorkeling sites on the planet. © Keoki Stender

Despite the fatigued looks on our travelers’ faces after 20+ hour flights, we were still able to sense their excitement upon arriving for the start of our Palau snorkeling trip. On arrival we all received a rapid COVID test, and once we got our negative results we were transferred to our accommodations for the trip, Cove Resort.

We soon learned that Paramount Chief Ibedul Yutaka Gibbons of Koror state had passed away a few days prior to our arrival. A period of royal mourning was underway, and during this time tour operators were restricted in Koror state. This meant that we couldn’t visit many places that were part of our original itinerary, but thankfully our incredible local partners, Fish ‘n Fins, helped us adjust our plans to respect the cultural mourning requirements.

We went to the island of Peleliu today, taking a boat ride through the Rock Islands. We visited three snorkel sites and saw sharks, sea turtles, anemone fish, giant clams, Napoleon wrasse, sea cucumbers, crinoids and many, many other fishes too numerous to record!

We had lunch on a remote beach and sadly saw some plastic trash. A few of the group members initiated a spontaneous beach clean up. Our local guide was eager to help us and in the end we collected a big trash bag of waste that included pieces of styrofoam, plastic bottles, beverage cans, and a flip-flop. 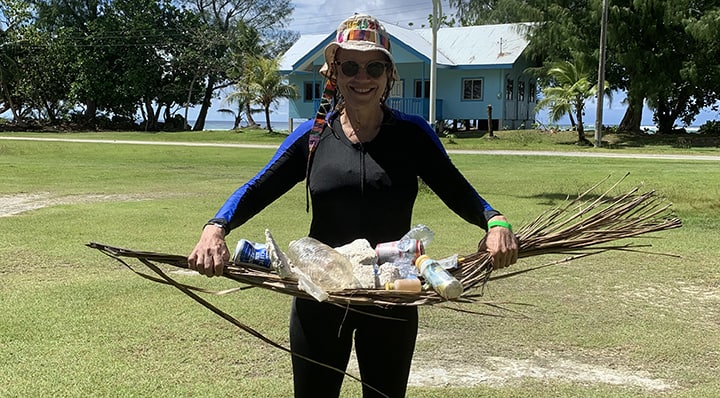 Blue Habits in action! A palm frond served as a collection bin during an impromptu beach clean-up at our lunch site.

Today we visited Peleliu again and snorkeled in areas close to where we snorkeled yesterday. We were lucky to spot a crocodile fish and witness surgeonfish spawning. The weather for the past two days had been sunny, but today it rained and was overcast. It was an interesting experience to snorkel when it’s raining hard – some said it’s like a back massage!

In the evening Ray gave a presentation about the natural history of Palau, coral ecology, and what we can do to protect the corals. The group had a lot of great questions and discussions around coral reefs and marine life. 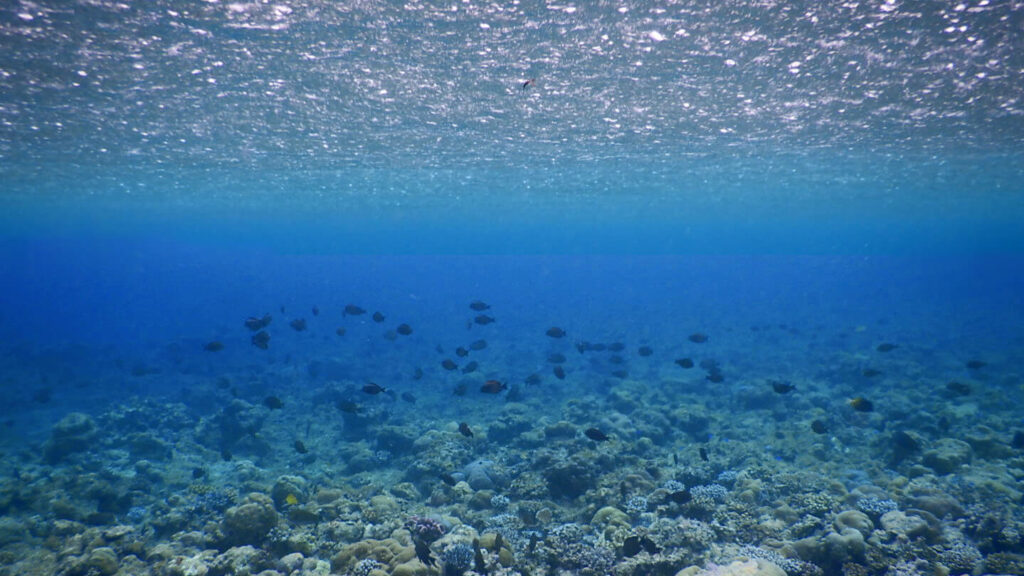 Snorkeling (and maybe a little singing) in the rain. © Pei Lee

We headed south towards Peleliu again under sunny skies, and admired the lush, green Rock Islands as we headed for our first of three snorkel sites. In the United States, November 11th is Veteran’s Day, and coincidentally, the island of Peleliu was the site of a World War II battle between U.S. and Japanese forces. There is a memorial museum and monuments, as well as old military installations and remnants from the battle can be found around the island.

The reefs we visited while snorkeling were incredible and full of life. We saw giant clams and fields of staghorn coral with reef fishes, sea turtles, bumphead parrotfish, Napoleon wrasse, stingrays, and several sightings of whitetip and blacktip reef sharks that excited the snorkelers.

The group transited further south along Peleliu’s western shore where they encountered a pod of playful spinner dolphins. As the boats cruised by, the dolphins responded with great leaps and porpoising, riding along the bow for several minutes. The explorers were thrilled and snapped many pictures and videos. It was the highlight of the day! 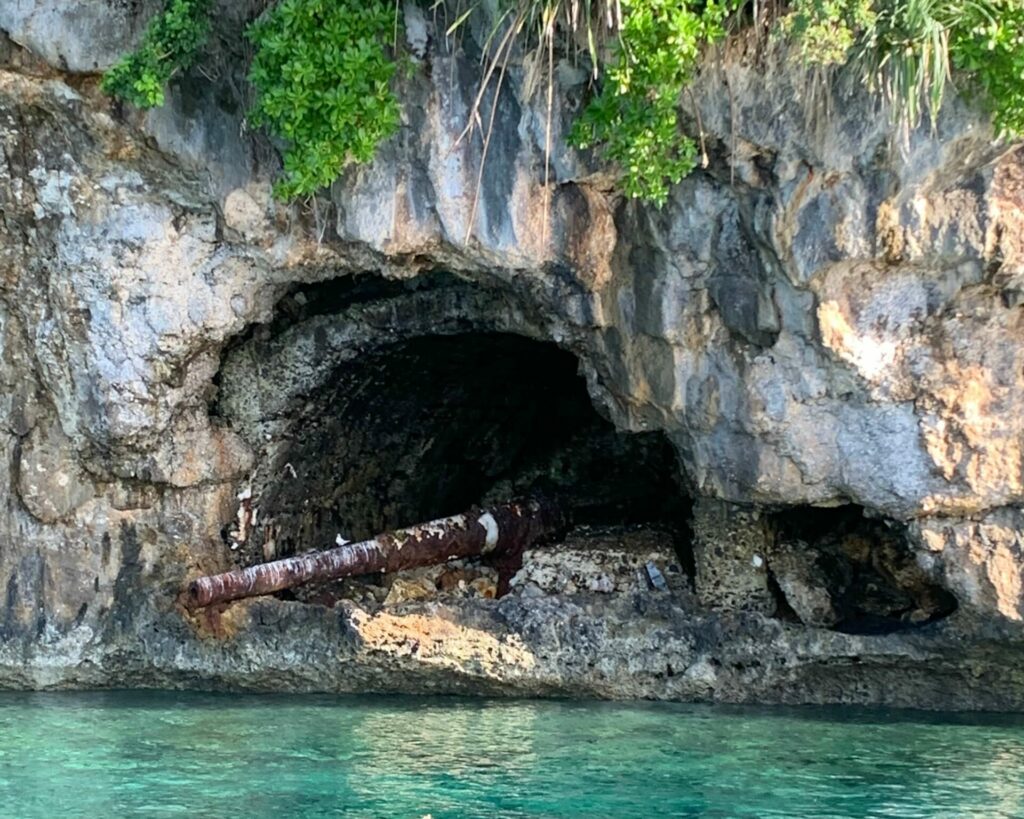 Artifacts from WWII can still be found around Palau, like this Japanese cannon. © Ray Boland

Following Palau’s COVID-19 protocols, we set out first thing in the morning to take tests at Belau National Hospital. While waiting in line, Pei led a discussion about Blue Habits with the group, sharing ways to live a pro-ocean lifestyle at home.

Palauan President Mr. Surangel Whipps Jr., was also at the hospital for a COVID-19 test, and was kind enough to take pictures and chat with the group. He shared how Palau is experiencing climate change first hand and how it impacts local tribes and their survival. Pei invited Mr. Whipps to dinner; he politely declined, but it was worth a try!

After receiving our negative results, we hopped into the boats to visit some new snorkeling sites.

We transited along the western shore of Babeldaob, the largest Palauan Island. The first snorkel was to be on the northern side of the ship channel called West Passage. The branching coral extended as far as we could see, with snappers, butterflyfish, parrot fish, and moray eels. 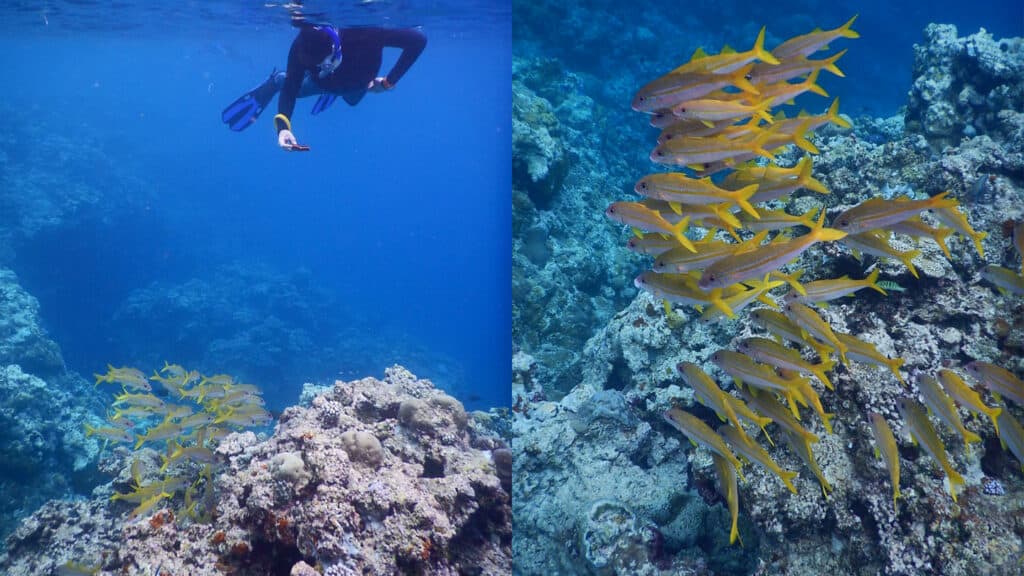 We had lunch at a small boat harbor that was near a small fishing village. After eating we walked by the village, exchanged pleasantries with the villagers, and admired a fisherman’s fresh catch of spiny lobsters.

Back aboard the boats, we headed for a different, nearby site. We saw some fluorescing corals and others showed signs of bleaching, which sparked a conversation about the impacts of climate change on coral reefs. We saw sweetlips, snapper, a Dr. Seuss fish, and many amazing clownfish and sea anemone pairs. 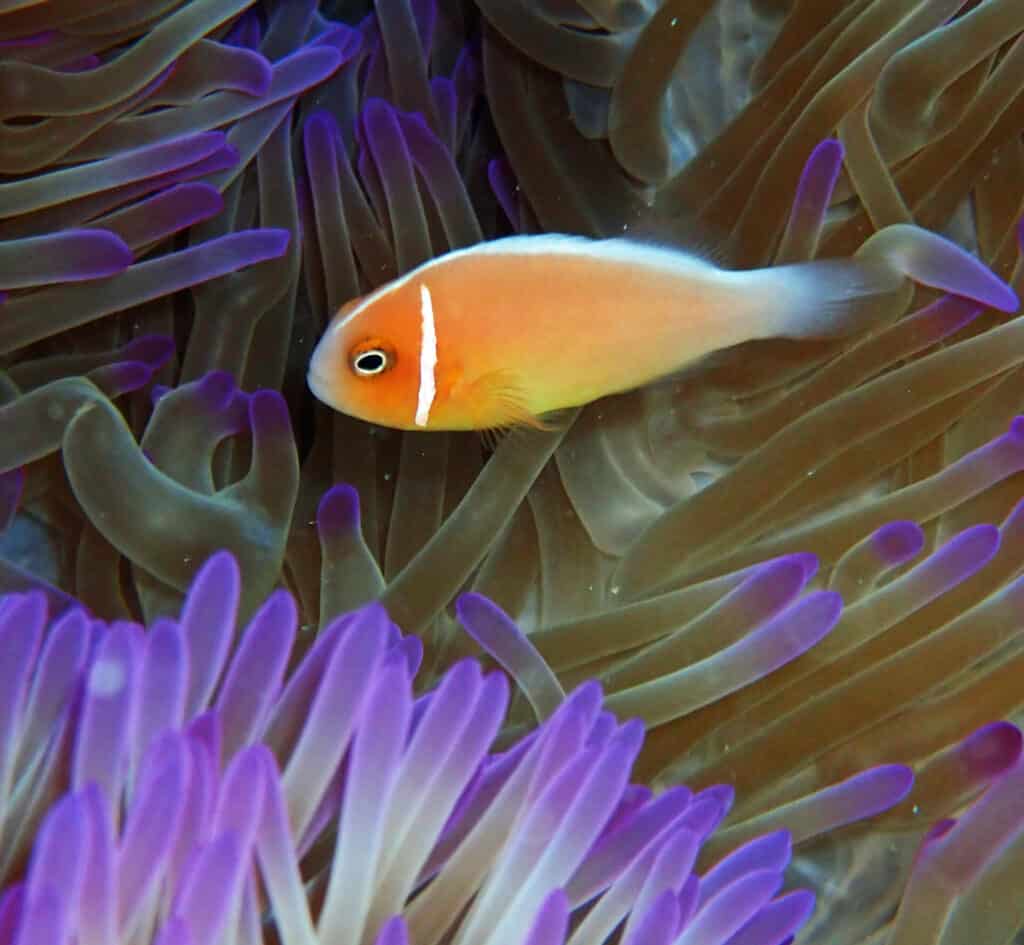 One of the many clownfish and anemones we saw. This is a pink skunk clownfish with a magnificent sea anemone © Ray Boland

Today we headed to a site called Turtle Cave, where the divers in our group explored the depths while the snorkelers checked out the shallower reef. Living up to its name, the divers reported seeing many sea turtles!

An underwater chimney and cave marked the second snorkel spot and surface interval for the divers. After a lunch break, we went to the site of the day, Barnum’s Wall. Both divers and snorkelers reported many sea turtles, along with juvenile black snappers and enormous boxfish. 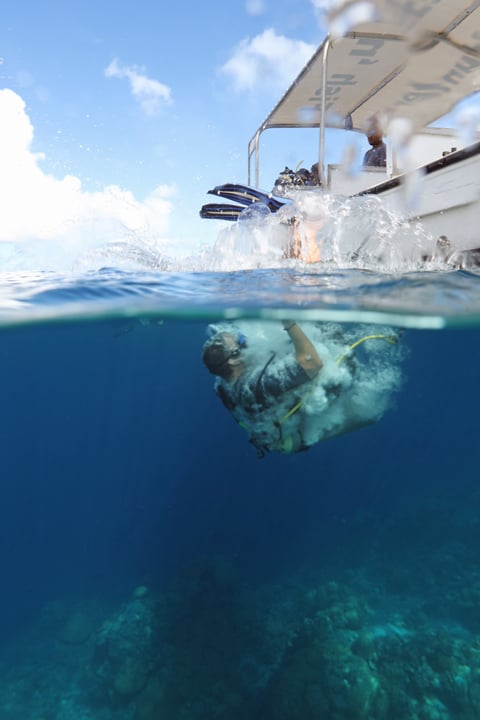 The flat ocean and dark gray sky were almost indiscernible from one other. It reflected our reluctant feeling about our snorkeling adventure in Palau coming to an end. As the boats headed towards today’s snorkel site, the skies threatened to rain the entire time. We explored the southern reef inside the West Passage and saw lionfish, giant moray eels, a sea snake, a titan triggerfish, and abundant coral with sandy and rubble channels between. 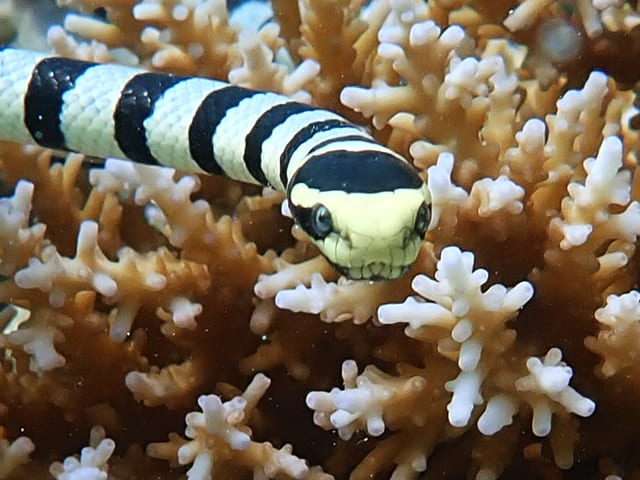 The second site, called Devilfish City, is a natural channel and is known for mantas hanging out, though we didn’t see any. After lunch, we snorkeled an area with huge stands of staghorn coral and abundant reef fish.

Our last site for the day, and our trip, was a fringing reef near Babeldaob, with moray eels, clownfish and anemone pairs, a remora, and a flyby from a manta.

It was now time to pack and depart. We thanked and said goodbye to our captains and guides, then had a final celebratory dinner. 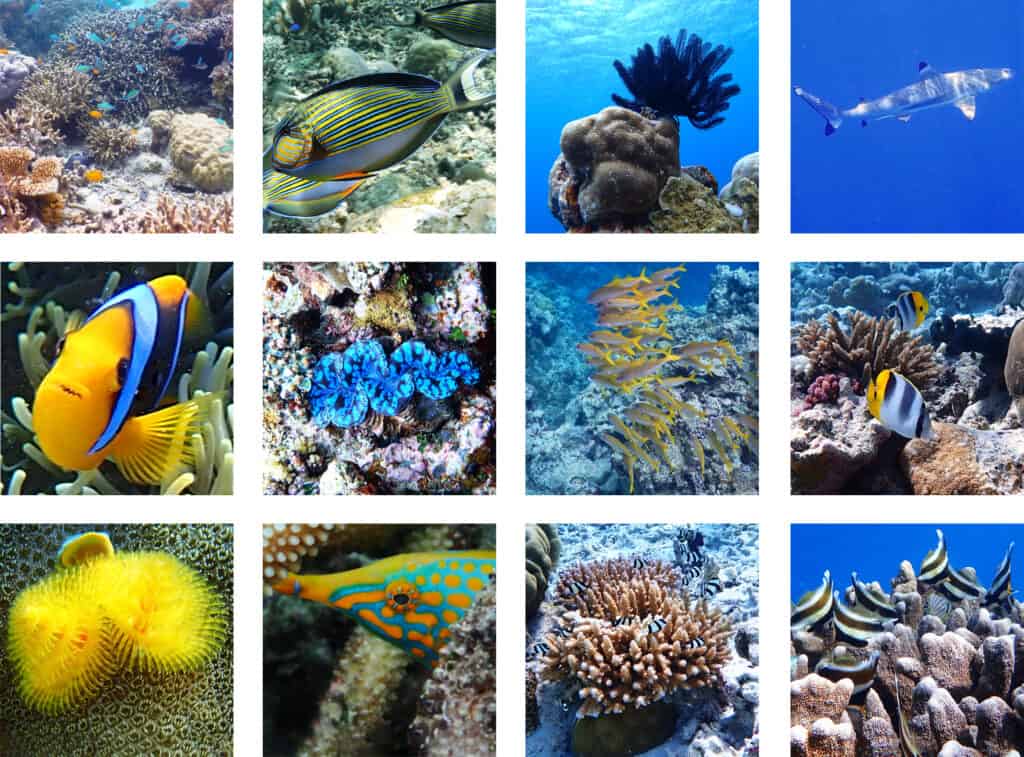 Pei Lun Lee is Oceanic Society’s Conservation Travel Program Coordinator. Pei holds a BA in Hotel and Tourism Management from New York University with focus in Sustainable Planning. She has years of experience in hotel operations, which brought her to live and travel to many exotic corners of the world. Pei is also an ocean lover and avid diver.