Up Close and Personal with Tonga’s Humpback Whales

Each day that we traversed the maze of small islands that make up the Vava’u group in northern Tonga, it seemed like we took a slightly different route. And it seemed like every passage revealed a new postcard-perfect tropical island, more idyllic than any seen before. “There’s my island,” said David upon spotting one with dense tropical foliage framing a gleaming white sand beach. “You can have it,” I said. “I’ll take that one over there, with the sand beach ringing the entire island.” Of course it was a fantasy game – foreigners may not own land in Tonga. And we were all grateful for that fact, as otherwise the whole bejeweled archipelago would have likely sprouted developments long ago, shattering the impression of an unsullied Garden of Eden.

Within the maze dark clouds of brown noddy terns hovered over schools of juvenile flying fish and other bait, picking off any fish that came close enough to the surface. Ethereal white fairy terns joined in most of the feeding frenzies, and occasionally brown boobies bombed into the fish schools, plunging to depths of several meters to snap up fish that the surface-feeding terns couldn’t reach. At Maninita Island, a bird sanctuary, we saw all of these, plus red-footed boobies and frigate birds, even getting to watch an aerial dogfight between a noddy and the much larger frigate which pirated the fish intended for the noddy’s chicks.

But bird-watching was just a diversion from our primary mission, which was to swim with southern humpback whales, the most acrobatic and boisterous of the great whales, which make an epic 3,000+ mile migration each year from their feeding grounds in Antarctica to bear their calves, cavort, and conceive next year’s brood in this tropical paradise. The almost innumerable small islands and reefs create sheltered waters that are not only ideal for the nurturing of baby whales, but also for swimming with them. An Oceanic Society traveler snorkels near a humpback in Tonga. © Doug Perrine

Swimming with humpback whales, under permit and following prescribed protocols, has been sanctioned in Tonga since the early 1990s, which translates to up to six generations of humpbacks. This means that we might well be swimming with whales whose great-great-great-great-grandmothers had experienced gawky but harmless terrestrial animals suddenly appearing in their world and ogling them. Decades of habituation have eliminated any trace of skittishness from many members of this population, in marked contrast to whales in other areas where swimming is not allowed.

Time and again we had to swim backwards to avoid a close inspection by a junior leviathan with an excess of curiosity and perhaps inadequate awareness of the reach of those greatly elongated pectoral flippers that give humpbacks their generic name, Megaptera, which translates as “great wings.” As this was my fifth trip to Vava’u over the course of more than two decades, I’ve been able to personally witness this behavioral transformation. Each time I come, I’ve been astonished at how accepting the whales have become. I’ve also been astonished at how little the overall environment has changed. Vava’u remains a nearly unspoiled paradise, in stark contrast to many other places that have been a part of my life.

Whale swimming has not only been beneficial to the Tongan economy, but also to the whales themselves. Ecotourism was a major factor in the decision to end whaling in Tonga, and continues to provide a critical counterbalance to the attempts of whaling nations to influence Tonga to revive whaling in the Kingdom. The subpopulation of southern humpbacks that summers primarily in feeding area VI of Antarctica and winters in Tonga has not been well-studied, but indications are that it has been expanding at a rate between 4-7% since the end of commercial whaling, reaching a population somewhere around 1,000-2,000 animals, up from a low of only a few hundred at the end of whaling. So the whales are not only more friendly each year, they are also more numerous!

Even with all these advantages, daily encounters with giants cannot be guaranteed. Weather plus the behavior and location of the whales on any day can conspire against us. However, in two trips, with a combined 12 days on the water this year, there was only one day on which we were not able to swim with whales. Often, by noon, our intrepid explorers were so satiated by their morning whale swims that they chose to ditch the whale search for a relaxing snorkel over a vibrant coral reef at Coral Gardens or a visit to Swallows Cave, where a mesmerizing school of baitfish swirls in a cool grotto, spotlighted by sunbeams dancing through the keyhole entrance. Back at the resort we could spend our afternoons relaxing on the beach, or snorkeling around the dock and seagrass beds just in front. The massive school of silversides swirling around the dock even put on a show we could watch from the dining area during breakfast. When blue-finned trevally would launch a blitzkrieg attack, the silvery baitfish would shower out of the water – often providing a meal for the quick-reflexed gray heron patiently waiting for just such an opportunity. Sometimes even the beach-roaming domestic pigs would manage to snatch a fish that landed on the beach. Putting on a mask and fins, we could see much, much more. Gaudy Picasso triggerfish would rush at our masks in an apparent attempt at intimidation. This is the fish immortalized by its Hawaiian name “humuhumu-nukunuku-apua’a” in the song “My Little Grass Shack in Kealakekua, Hawaii.” We also saw rainbow-hued parrotfish, angelfish, butterflyfish, grouper, needlefish, cigar wrasses, and large anemones hosting anemonefish and clouds of damselfish. Carol even spotted a rare otter-faced potatofish! On Sundays, when commercial operations are grounded by royal decree, we could not only snorkel, kayak or relax, but also had a wide choice of church services available to attend. With the lack of economic opportunities in this rural Kingdom, some visitors might wonder what Tongans do with all their time and energy. Many put a large portion of it into choir practice. Choral singing in Tonga is very competitive and is performed at a very high level. I couldn’t understand what the minister was preaching at the services I attended, but I definitely felt closer to heaven when the choir raised the rafters with their singing – almost as close as I felt watching the shimmering downward-converging rays of sunlight (aka “fog beams” or “God rays”) swirling around a baby humpback whale flopping around on the snout of its mother in the place I call the “Blue Cathedral.” A beautiful sunset from our hotel in Tonga. © Doug Perrine

Click here for more information about our Tonga: Snorkeling with Humpback Whales expedition.

Doug Perrine earned a master’s degree in marine biology from the University of Miami and worked as a marine biologist, naturalist, and scuba instructor before taking up nature photography and writing as a full-time profession. Doug is now widely regarded as one the world’s foremost marine wildlife photographers. His photographs have been published in thousands of magazines (including National Geographic, Time, BBC Wildlife, etc.), books, calendars, and other graphic products. He is the author of seven books and numerous magazine articles on marine life. His images have been displayed at the Smithsonian Institute, the British Museum of Natural History, and numerous other prestigious institutions. His photographs have won a number of awards, including the grand prize in the prestigious international Wildlife Photographer of the Year competition in 2004. He has continued to be involved in marine science, including 20 years as a volunteer with the Hawaii Whale Research Foundation, studying humpback whales. Perrine currently lives in Kona, Hawaii.

Sighting of Rare Leucistic Killer Whale at the Farallones 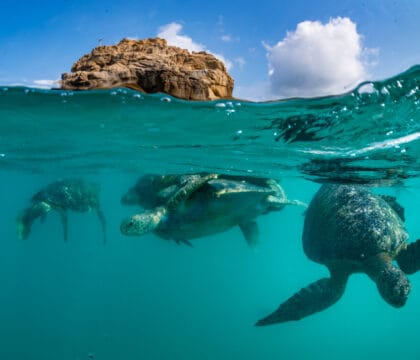 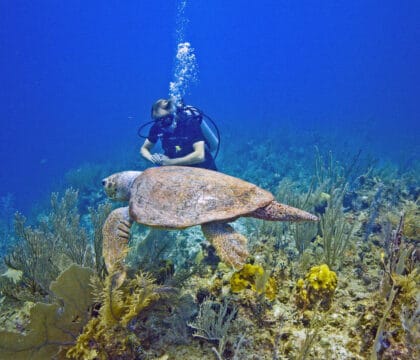