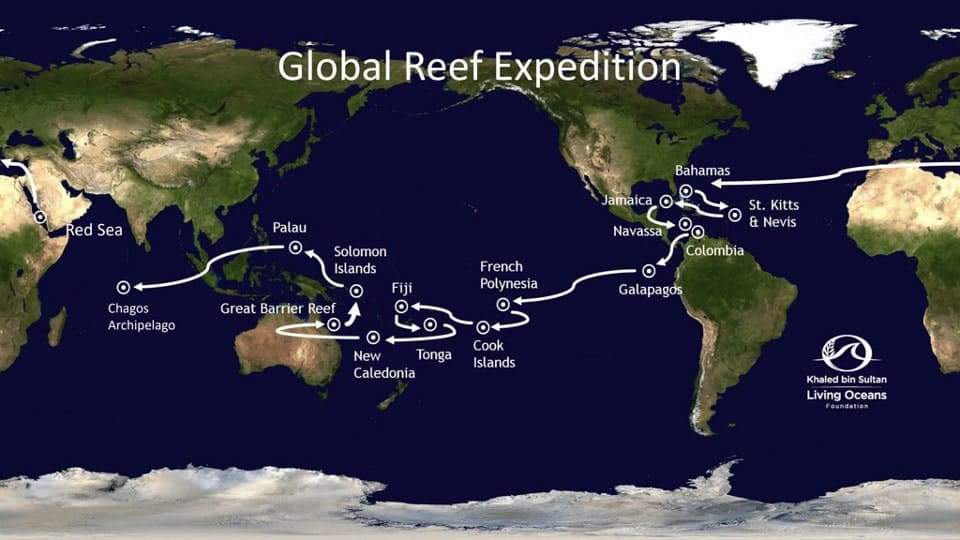 Both natural and man-made factors have contributed to a precipitous decline in coral reefs as coastal development, pollution, disease, severe storms, and climate change have all impacted the health of coral reefs. As oceans continue to warm, and massive coral bleaching events occur with increasing frequency and severity, coral reefs are struggling to survive. Scientists estimate that half of the world’s coral reefs have been lost in the last 40 years. Coral reefs are clearly in crisis. How do we save the reefs that remain before it is too late? 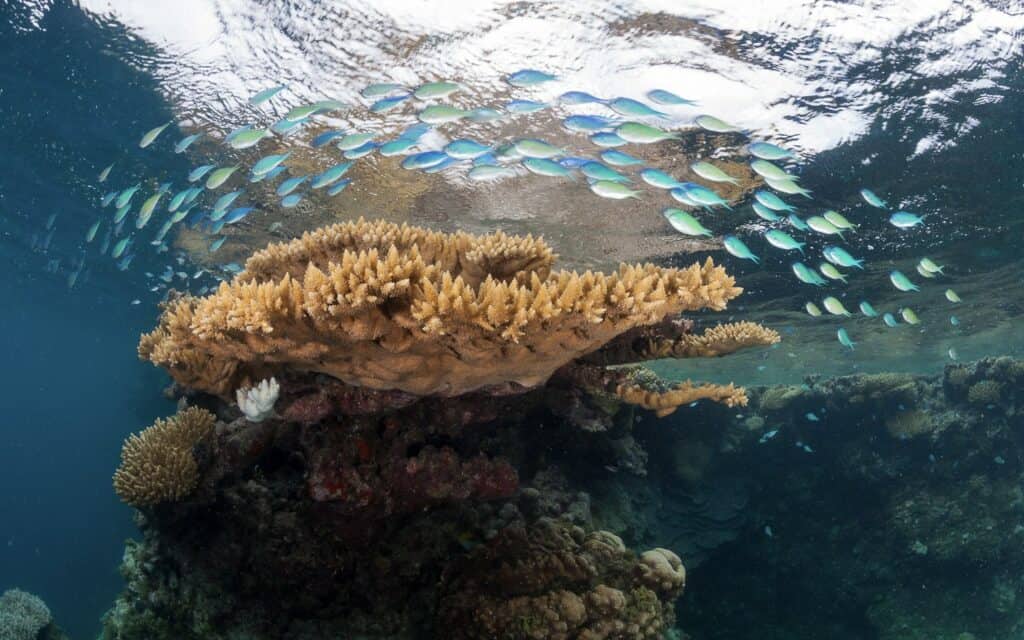 Branching Acropora abrotanoides and schooling blue chromis. The white section suggests it could have been eaten by crown of thorns or a small snail. © Michele Westmorland/iLCP

The Khaled bin Sultan Living Oceans Foundation embarked on the Global Reef Expedition to address this coral reef crisis. This research mission brought together hundreds of scientists from around the world to conduct tens of thousands of standardized scientific surveys at over 1,000 reefs in 16 countries. The Expedition traveled around the globe surveying and mapping coral reefs, from the Red Sea through the Atlantic, Pacific, and Indian Oceans. Scientists on the research mission worked closely with local experts, managers, educators, and government officials to help the Foundation collect the data needed to develop science-based solutions to conservation.

“The Global Reef Expedition was a monumental achievement. It owes its success to nimble planning and a common vision shared by a broad group of forward-thinking scientists, managers, and educators,” said Sam Purkis, KSLOF’s Chief Scientist as well as Professor and Chair of the Department of Marine Geosciences at the University of Miami’s Rosenstiel School of Marine and Atmospheric Science. “I have no doubt that the baseline determined by the GRE for the world’s reefs will remain a reference for centuries to come.” 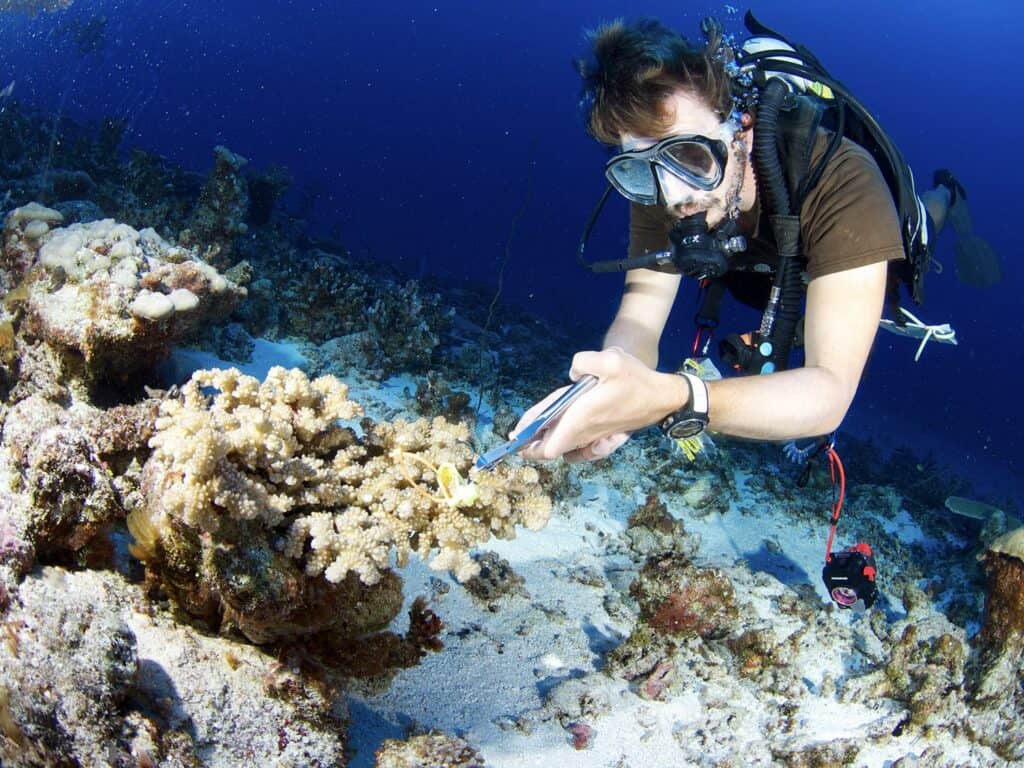 A coral reef scientist takes a sample of coral for analysis on the Global Reef Expedition mission to the Solomon Islands. © KSLOF/Ken Marks

The Global Reef Expedition set out to understand the health of the world’s reefs by surveying and mapping coral reefs, identifying their current status and major threats, and examining factors that enhance their ability to survive—and recover from—major disturbance events such as coral bleaching. In addition to the scientific efforts, the Global Reef Expedition also engaged in education and outreach programs designed to improve ocean literacy, educate students and community leaders about coral reefs, and inspire conservation action.

Findings Show the Global Nature of the Coral Reef Crisis

“One of our most significant findings from the Global Reef Expedition was that nearly every country we studied showed signs of overfishing. Even on some of the most remote and well-protected reefs,” said Renée Carlton, a Marine Ecologist at the Khaled bin Sultan Living Oceans Foundation and the lead author of the report. She noted that finding fewer and smaller fish on the reef poses problems for the health of the reef itself as well as the people who depend upon them for protein and income. She hasn’t lost hope though, as the best reefs tended to be the ones that were remote and well-managed, but not exclusively so. “We know marine protected areas work, in most instances these reefs had some of the best coral cover and reef fish communities, but climate change, storms, and outbreaks of crown-of-thorns starfish can still have deadly consequences to a reef, no matter how remote or well-protected it is.” 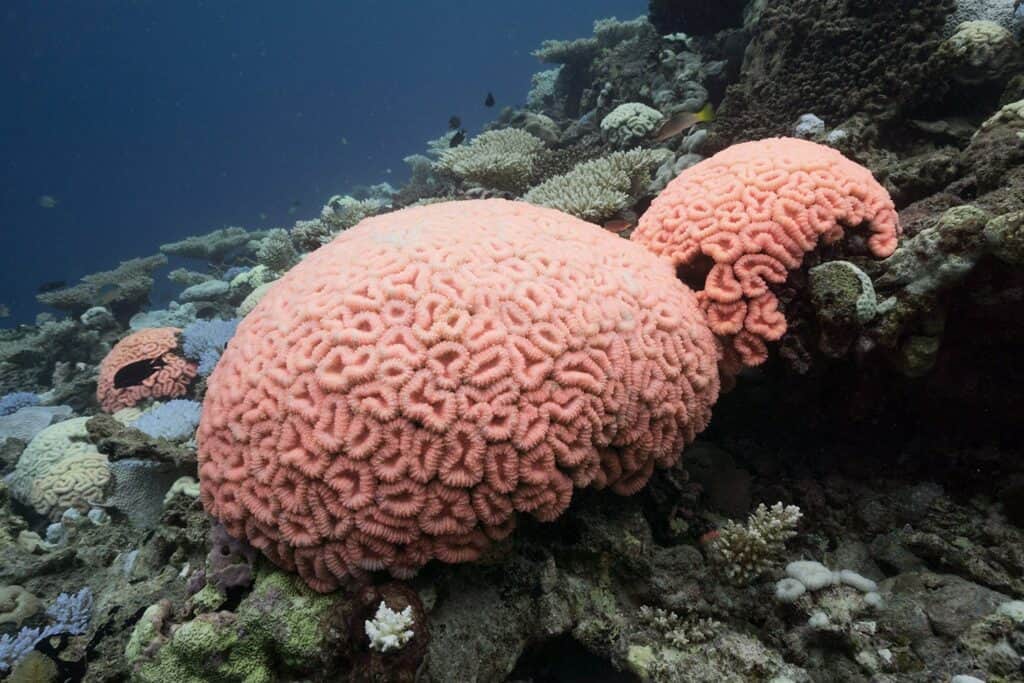 Corals can turn brightly colored shades of pink, blue, and yellow in the process of bleaching. This was part of a global mass bleaching event that the Global Reef Expedition encountered in the Chagos Archipelago. © KSLOF/Phil Renaud

The report notes that swift action is needed to address climate change and overfishing in order to combat the coral reef crisis. However, it also identified management efforts, such as reducing pollution and establishing marine protected areas, that can be taken to spare local reefs from the worst impacts of these global problems. These conservation efforts may be able to help save the reefs that remain.

The Foundation had its greatest success in coral reef conservation by engaging local communities directly in conservation. By involving local experts and government officials in data collection, combining the scientific findings with outreach and education efforts, and addressing disparities in ocean literacy, the Foundation was able to provide countries with the information they needed to manage their marine resources effectively. 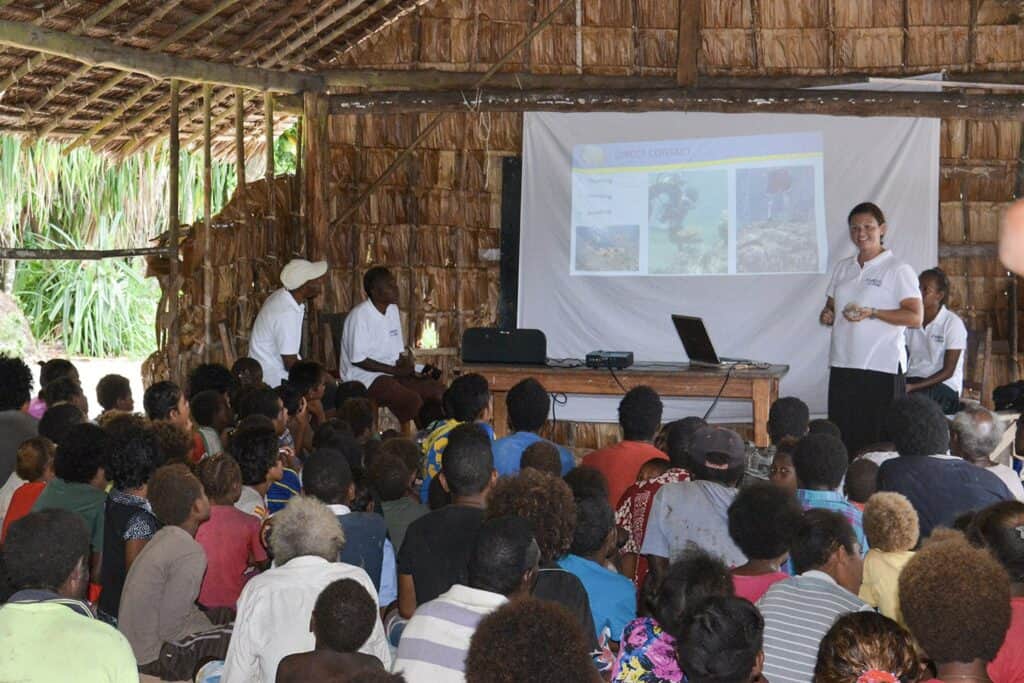 Education and outreach seminars in the Solomon Islands focused on teaching islanders about coral reefs, the threats they face, and how people benefit from this coastal marine ecosystem. © KSLOF

“Findings from the Global Reef Expedition are already helping countries protect and preserve their reefs and coastal marine resources,” said Alexandra Dempsey, the Director of Science Management at the Foundation. “Marine protected areas, fisheries closures, and traditionally managed areas have been established in The Bahamas, Jamaica, Fiji, and the Cook Islands, using information collected on the Expedition.”

The Khaled bin Sultan Living Oceans Foundation freely shared its research findings with government officials, marine managers, and other conservation organizations so that the maps and data from the Global Reef Expedition could be used for marine conservation.

Now that the Global Reef Expedition is complete, Prince Khaled bin Sultan, who funded and spearheaded this research mission, says he hopes the findings will help to “leave a legacy of ocean conservation, so our children, and our children’s children, can also experience the beauty and wonder of a coral reef.”

For more information about the Global Reef Expedition, visit https://www.livingoceansfoundation.org/global-reef-expedition/.